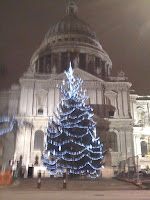 I realize I haven't been very good at updating this that regularly. When you work for a church, Christmas time, for some reason, seems to be the most busiest time of the year. So just briefly ill bring you up to date with what we have been doing.

Over the the last week or so we have had three Carol services in Covent Garden and Soho. All have been attended by non-Christians.

We have been carrying on with our open air evangelism in Covent Garden. This time of the year is the hardest to do this type of work. People have just got their heads down and are running to the next shop.

Last Saturday 20th I was invited to preach at an youth event held by Child's Hill Baptist. This was a good time, of party games and food, and was attended by a mixture of Christians and non-Christians. We looked at the same subject as our carol service 'What difference would it make if Jesus' birth was canceled?'. 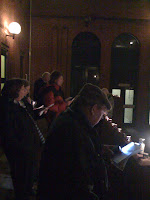 Last Thursday 18th we went Carol Singing around 4 local estates. All of them saw people walking out onto their balcony's, opening windows or even coming down to join in the singing! It was a good time to use Christmas to raise the profile of the church.

Finally then I was in Trafalgar Square the other day, and found myself some what taken back and confused. This year (and it might be every year) they had a nativity scene, which is situated in a big glass box. At first glance even though its slightly Catholic looking its encouraging, Mary, Joseph, Shepherds, the Wise men, an Angel, and even Jesus were all in attendance. However I was slightly confused with an extra women standing holding a jug (situated top right of the picture). Anyone got any ideas who this might be? 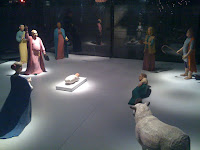 Talk - What Difference would it make if Jesus' birth was Canceled?

Today was our carol service in Covent Garden. It was a good time to stop and remind our self's the real reason for Christmas - Jesus. Its so hard even for Christians some times not to get pulled in with the whole commercial side.

Below is the talk I gave during the service.


Below is the video that went with the talk

'How would it affect you if Christmas was Canceled?'


What do you think? Do leave a comment below.
Posted by Roger Carter at 22:19 No comments:

How would it affect you if Christmas was canceled?

This video was shot for our Carol service here in Covent Garden.

Below is the talk that went with the video.

'What Difference would it make if Jesus' birth was Canceled?'


What do you think? Do leave a comment below.
Posted by Roger Carter at 22:12 No comments:

The Boys in Town

This weekend saw the boys in town - Rob Sharpe and John Tinsley, or as we have decided to call him A to Z, because of the amount of times he got lost over the weekend. 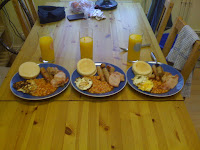 The weekend started with an heart attack on a plate, cooked by our own chef Rob.

After which Rob and AtoZ beat me silly on the Xbox 360 for a couple of hours.


In the afternoon we decided that a 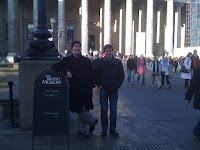 bit of culture was in order, so we went on a journey to the British Museum. We traveled through Egypt looking at how Mummification work, before heading over to Japan. It was there we found an sign written in 1682, with the inscription;

Christianity has been forbidden for many years. Of course, if there is someone suspicious you must report them. Rewards will be given as follows; 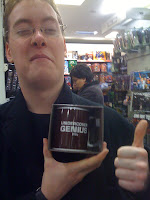 We decided we were very grateful for being in England during the 21st century. Next it was onto the Fobiden Planet were Rob found his perfect cup.

After AtoZ set us the channgel to get a coffee from a unchanged coffee shop, which by the way isn't as easy as you would expect. Once we had succeed by going to the LCM coffee shop in Covent Garden, we headed back home to watch Casino Royal before going to see the new Bond film Quantum of Solace.

Finally it was home for a late night of gaming and of course pizza. 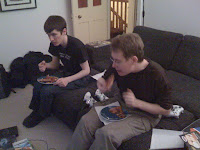 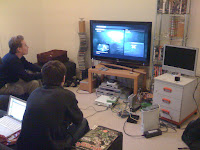 When it came to Sunday morning we did however regret the late night as it was up early for Church in Soho. 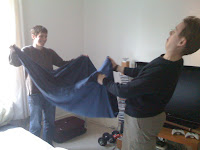 On Tuesday evenings we have our regular church bible study in our Fair Trade shop in Soho. Afterwards we then go out onto the street to chat to people passing by, and hand out some booklets that ask challenging questions, for example 'Are you Good enough for Heaven?'. 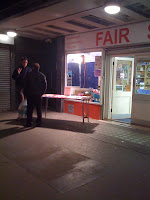 Normally we will have at least one or two good conversations with the passerby', however the last couple of weeks its been very hard, with very few people stopping to talk. We've been asking ourselves what the reason might be, the cold? The fact we have building works going on right out side our shop? We've also been asking could we do something different to help start conversations.

However saying all that last night was a real surprise. Even though it was really cold, we were having a number of good conversations with people. One of mine was interesting. I was chatting to a guy that would class himself as a christian because he was christened at birth, but and with his own words 'clearly I'm not'.

I asked him if he thought there was life after death? the answer came back 'we'll find out when we die'. 'That's true' I said 'but by that stage isn't it too late?' The guy replied 'Well I hope that my good actions might help me if it is true.' 'I'm afraid to break it to you mate but they won't'. He was quite surprised and with a worried response asked 'Whys that?'. Well I said 'If God is real he is therefore perfect and good, and his standard of goodness is far beyond anything we could achieve, how could we ever do anything that is good compared to God?' Straight away the reply came back 'Who says God is Good?' 'Jesus does and so does God.' I said 'that God himself defines who he is and his character and Jesus confirms that'. The man started to laugh. 'What do you find funny?' I asked. 'The fact that God defines God, I mean how can God define himself, we (as 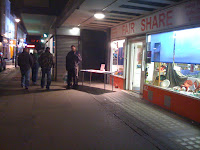 humans) should define God.' 'Whys that?' I asked, and here is the interesting bit. 'Because' he said, 'we are the source of knowledge not God.'

This is an understandable reaction, if you don't believe in God, of course you are going to see humans as the source of knowledge, more than that though, and this is his problem, he wouldn't see God as God. If he did, he would realise that in fact God can and does define himself. His real problem is that he sees something else as God, and not Jesus.

I've been asking myself the last couple of weeks how can we, in a space of minuets (because that is all you get with this way of evangelism), show people, that even though they don't believe in Jesus, they are in fact believing in another type of god and, that god is useless, because it is not living, and cannot in anyway save them.
Posted by Roger Carter at 12:09 1 comment: